The Andy Warhol Foundation for the Visual Arts has announced the election of two new board members, Adam Weinberg and Carrie Mae Weems. 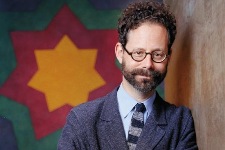 Adam Weinberg is currently Director of the Whitney Museum of American Art, where he has served with distinction since October 2003, overseeing major exhibitions on a wide range of artists, including Ed Ruscha, Gordon Matta-Clark, Sherrie Levine, Glenn Ligon and Wade Guyton; award-winning educational programs; and the construction of a new 200,000 square foot Renzo Piano designed building in the Meat Packing District. Previously, Weinberg was the Director of the Addison Gallery of American Art at Phillips Academy, Andover, from 1999 to 2003. Throughout the 1980s, he worked at the Walker Art Center, Minneapolis, where he served as Director of Education and Assistant Curator. In 1989, he joined the Whitney for the first time as Director of the Whitney branch at the Equitable Center. Weinberg then assumed the post of Artistic and Program Director of the American Center in Paris in 1991. He returned to the Whitney as Curator of the Permanent Collection in 1993 and was made Senior Curator in 1998.

Weinberg has served as a board member for a diverse group of organizations, including the American Federation of the Arts, Storm King Art Center, Williamstown Art Conservation Center, and the Minnesota Composers Forum. He has been a grant panelist for numerous federal, state, city and private foundations. He holds a B.A. from Brandeis University and a Master's degree from the Visual Studies Workshop, the State University of New York at Buffalo.

Carrie Mae WeemsCarrie Mae Weems is a highly acclaimed artist with a long and illustrious career who is currently the subject of a major retrospective of her art at the Frist Center for the Visual Arts, after which it will travel to the Portland Art Museum, Cleveland Museum of Art, Cantor Center for the Visual Arts at Stanford University and the Solomon R. Guggenheim Museum.

Weems was born in Portland, Oregon, in 1953 and holds a B.F.A. from the California Institute of the Arts, Valencia and an M.F.A. from the University of California, San Diego, and continued her studies in the Graduate Program in Folklore at the University of California, Berkeley. Her awards include the Alpert Award for Visual Arts, a National Endowment for the Arts Visual Arts Grant, a Pollack Krasner Foundation Grant in Photography, the Women In Photography International Distinguished Photographer's Award, and honorary degrees from Colgate University and California College of the Arts.

Joel Wachs, President of the Andy Warhol Foundation for the Visual Arts, said the addition of Ms. Weems and Mr. Weinberg gives the board the strength of powerful voices and proven leadership in two of the Foundation’s most important constituencies—contemporary U.S. art museums and the artists they serve; and Michael Straus, the Foundation’s Chair, expressed the Board’s enthusiasm in welcoming two such capable and inspiring successors to the Foundation’s retiring board members, Lisa Phillips, Director of the New Museum, and Jock Reynolds, Director of the Yale University Art Gallery.