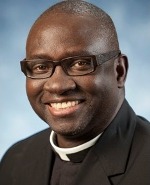 Trinity Wall Street has announced that the Rev. Canon Benjamin Musoke-Lubega has been named the new Director of Faith in Action, a programming arm that encompasses the historic Episcopal parish’s outreach in Lower Manhattan and its esteemed national and international grantmaking. Since formal inception of the Trinity Grants Program in the early 1970s, a robust series of grants has focused on supporting the flourishing of the African continent. Musoke-Lubega, Ugandan by birth, will be the first African to fill this role.

“Trinity Wall Street is a partner to so many here in New York and around the world. I am thrilled to announce that, in Benjamin, we have a generous and wise leader to bring our partnerships forward into the bright future,” said the Rev. Canon Anne Mallonee, Vicar of Trinity Wall Street and executive with overall leadership responsibility for Faith in Action.

Musoke-Lubega takes up oversight of a grants program that is slated to spend $3.2 million in 2013 — the highest amount in more than two decades. Recent Trinity grants supported, among many efforts, peace-building and telecommunications improvements in South Sudan, and the Episcopal Service Corps, a formation program for young adults who live for a year in communities serving others here in the United States.

Historically, the Trinity Grants Program won renown for its early support of the ministry of an Anglican priest in South Africa, Desmond Tutu, who would become Archbishop of Capetown and a Nobel Laureate. It has also funded successful affordable housing and jobs creation in New York, and the work of priests advocating for the rights of rural and migrant workers.

“To be offered an opportunity to contribute in this way to such an important New York City parish as Trinity is a deep honor,” said Musoke-Lubega. “I am indebted to all who came before me, and all those who I have worked alongside, who made this role as full as it is today. The partners we work with worldwide know they are cared for by the people of Trinity Wall Street, and that the people of Trinity care for New York City, and for each other, as well. In the care and concern that comes with being in Communion, we strive forward together.”

In becoming the Director of Faith in Action, Musoke-Lubega is promoted from Deputy for Anglican Partnerships, a position he has held since 2010. He joined Trinity in 2005 as a Program Officer for Grants. At Trinity, Musoke-Lubega has been instrumental in galvanizing support around financial sustainability for the Church in Africa — a vexing problem African partners had suggested would be essential to address in order for the Church to continue to play a positive role in people’s lives.

As Director of Faith In Action, Musoke-Lubega will have oversight of the international and national grantmaking program as well as Trinity’s extensive local outreach. This includes the operation of a neighborhood center, a brown-bag lunch program for those in need and advocacy for local public schools.

“Benjamin realizes that essential truth: all that we have is gift,” said the Rev. Dr. James H. Cooper, Rector of Trinity Wall Street. “He is a fine steward, an insightful spiritual leader, and a friend to many, many people across the world.”

Born and educated in Uganda, Kenya and the United States, Benjamin holds a Master's of Sacred Theology from Nashotah House Seminary in Wisconsin. Prior to joining the staff of Trinity Wall Street in 2005, Benjamin was Partnership Officer for Africa at The Episcopal Church USA. He also served as Rector of the historic St. Matthew's and St. Joseph's Episcopal Church in Detroit, and was Vicar of Holy Spirit in Cincinnati. He was a Deputy to General Convention of The Episcopal Church 1991-2003. He served as Rector of a rural church in Uganda, prior to coming to the U.S., where he assisted with diocesan planning and development.

During his ministry in Detroit, he helped a suburban congregation make a healthy transition from being a joint ministry of the Episcopal Church and the United Church of Christ, to being a parish in the Episcopal Church. He has served on the Standing Commission on Anglican and International Peace and Justice Concerns, the Board of Church World Service, and the Standing Committee of the Diocese of Michigan.

Musoke-Lubega succeeds the Rev. Matthew Heyd, who was recently called as 10th Rector of Church of Heavenly Rest in New York City, and the Rev. Canon James Callaway, General Secretary of Colleges and Universities of the Anglican Communion (CUAC). Callaway is also consultant to Trinity Wall Street for Anglican Partnerships.