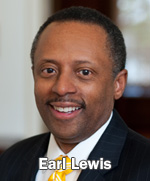 Earl Lewis, president of the Andrew W. Mellon Foundation; Gail Christopher, vice president for policy and senior advisor for the W.K. Kellogg Foundation; and Ana Marie Argilagos, a senior advisor at the Ford Foundation, began their terms of service at a meeting of the trustees on April 16, 2015.
"Mr. Lewis, Dr. Christopher, and Ms. Argilagos bring enormous experience in the nonprofit, foundation, academic, and public sectors and extensive expertise in the most pressing issue areas of our time, including diversity, health, and digital technology," said Foundation Center's president, Bradford K. Smith. "Their combined wisdom will strengthen our organization's ability to identify, understand, and communicate the key global trends that will determine the future of the social sector."
Earl Lewis is a distinguished scholar with expertise in American and African American history. Mr. Lewis joined the Andrew W. Mellon Foundation in New York City as president in 2013. The Mellon Foundation makes grants principally in five core program areas: higher education and scholarship, libraries and scholarly communications, conservation and the environment, museums and art conservation, and performing arts. Before joining the foundation, Mr. Lewis held faculty appointments at the University of California at Berkeley, the University of Michigan, and Emory University. He also served as provost and executive vice president for Academic Affairs and the Asa Griggs Candler Professor of History and African American Studies at Emory.
In recent years, Mr. Lewis has championed the importance of diversifying the academy, exploring the role of digital tools for learning, and connecting universities to their communities. "Society flourishes when information is easily accessible and openly shared," said Mr. Lewis. "I look forward to supporting Foundation Center's efforts to advance knowledge about philanthropy in new and dynamic ways."
Mr. Lewis has written extensively on diversity issues, history, and the urban experience, including several books, numerous essays and articles, and the 11-volume Young Oxford History of African Americans. He has also served as a member of several academic and community boards, founding co-editor of the award-winning book series American Crossroads, and fellow of the American Academy of Arts and Sciences. Mr. Lewis earned an undergraduate degree in history and psychology from Concordia College and a Ph.D. in history from the University of Minnesota. 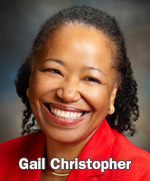 Dr. Gail Christopher, a nationally recognized leader in health policy with more than 20 years of experience designing and managing national initiatives and nonprofit organizations, is vice president for policy and senior advisor for the W.K. Kellogg Foundation (WKKF) in Battle Creek, Michigan, which focuses its grantmaking efforts on the optimal development of children. In her role, Dr. Christopher serves on the executive team that provides overall direction and leadership for the foundation. She has also led its Food, Health and Well-Being and Racial Equity programs.
"WKKF strives to uplift and empower communities so that even the most vulnerable populations can thrive," said Dr. Christopher. "The idea that philanthropy can transform lives and increase opportunity is also at the heart of Foundation Center's work."
Prior to joining WKKF, Dr. Christopher was vice president of the Joint Center for Political and Economic Studies where she led the Health Policy Institute, a multi-year initiative to engage underserved, racial, and ethnic minorities in health policy discussions. She has also launched, led, and managed three public commissions including the landmark Dellums Commission, which investigated conditions faced by young men of color. Dr. Christopher was recently honored with the esteemed Grantmakers in Health's Terrance Keenan Leadership Award in Health Philanthropy. She holds a Doctor of Naprapathy degree from the Chicago National College of Naprapathy and completed advanced study in the interdisciplinary Ph.D. program in holistic health and clinical nutrition at Union Graduate School in Cincinnati, Ohio. 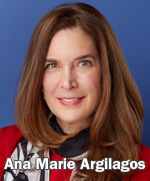 Ana Marie Argilagos is a senior advisor to the Ford Foundation's Just Cities and Metropolitan Opportunities initiatives, which support innovative strategies to increase economic opportunity and social justice in cities around the globe. She is also a professor of international urban planning at New York University's Wagner Graduate School of Public Service. Ms. Argilagos previously served as deputy chief of staff at the U.S. Department of Housing and Urban Development (HUD), where she created the Office for International and Philanthropic Innovation and served as its first deputy assistant secretary.
Ms. Argilagos' experience in leading interdisciplinary teams and bridging diverse agendas will put Foundation Center in a stronger position to convene and engage with multiple constituencies. "Social change is spurred by diverse voices and the exchange of knowledge," said Ms. Argilagos. "Foundation Center stands out as a leader in creating spaces for this exchange and leveraging shared wisdom to benefit the social sector."
Ms. Argilagos received a B.A. in international relations from the American University and a master's degree in public administration from Harvard University.