Rockefeller Brothers Fund Welcomes New Trustees to its Board 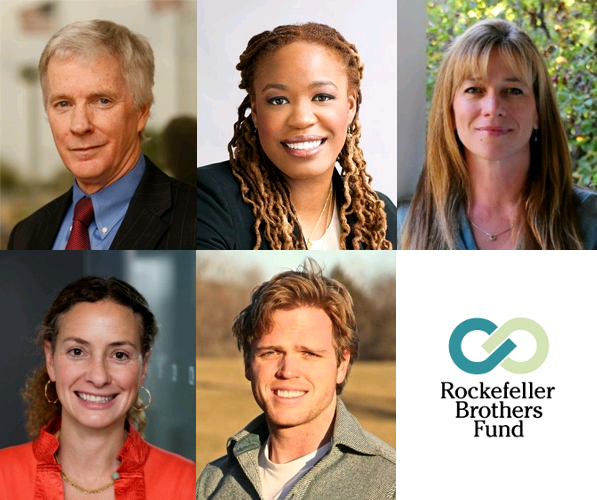 Rockefeller Brothers Fund Welcomes New Trustees to its Board

Four candidates were elected at the Fund’s annual meeting in June.

Ambassador Ryan Crocker is the dean and executive professor at the George Bush School of Government and Public Service at Texas A&M University, where he holds the Edward and Howard Kruse Endowed Chair. He is a former ambassador to Afghanistan, Iraq, Pakistan, Syria, Kuwait, and Lebanon.

Heather McGhee is the president of Demos, a public policy organization working for equality in American democracy and economic opportunities. She is a member of the World Economic Forum’s Global Agenda Council on Civic Participation and serves on the boards of the Center for Working Families and Consumer Reports.

Miranda Kaiser begins a new term as an RBF trustee, having previously served from 2006–2015. She is co-president of the Refugee Center Online, a nonprofit that helps refugees and displaced persons successfully reintegrate in the United States. Ms. Kaiser is a member of the Council on Foreign Relations, and serves on the boards of the Rockefeller Family Fund and the David Rockefeller Fund.

Wyatt Rockefeller is a filmmaker and investor with a background in energy policy and development. He has worked as the special assistant to the deputy administrator of the U.S. Environmental Protection Agency, and at an energy distribution startup based in Dar es Salaam, Tanzania called EGG-energy, Inc.

The four new trustees join Jennifer Nolan, an award-winning author and passionate environmentalist, as the Fund’s newest board members. Ms. Nolan was elected and joined the board in March. She has decades of experience serving on nonprofit boards including the United States Fund for UNICEF and Maine Audubon.