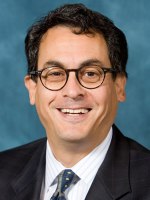 Howard Markel, M.D., Ph.D., will become Editor-in-Chief of The Milbank Quarterly on October 1, 2013, succeeding Bradford H. Gray, Ph.D., Editor since 2000. Announcing this appointment, Christopher F. Koller, who becomes President of the Milbank Memorial Fund on July 15, said that Dr. Markel is "superbly qualified to maintain and enhance the Quarterly's role as a leading international journal of health care policy and population health."

Dr. Markel will continue his current work as a professor, researcher, author, educator and public health policy advisor. He serves as the George E. Wantz Distinguished Professor of the History of Medicine and Director of the Center for the History of Medicine at the University of Michigan, where he also holds professorial appointments in psychiatry, public health, history, English literature and language, and pediatrics and communicable diseases.

A critically acclaimed historian of medicine, he has written more than 350 articles in peer-reviewed journals and the popular press. He is a frequent contributor to The New York Times, National Public Radio, and PBS NewsHour, and is also the author or editor of ten books. His most recent volume is the national best-seller An Anatomy of Addiction: Sigmund Freud, William Halsted, and the Miracle Drug, Cocaine (Pantheon/Alfred Knopf Books, 2011), which was reviewed on the front page of The New York Times Book Review and described as "a tour-de-force of scientific and social history." An internationally known authority on the social history of epidemics and quarantine, Dr. Markel leads a research team at the University of Michigan investigating the effectiveness of public health interventions during influenza pandemics from 1918 to the present. As a result of this work, he advises the U.S. Centers for Disease Control and Prevention on policy for preventing and containing current outbreaks of that disease. Dr. Markel was elected to the Institute of Medicine of the National Academy of Sciences in 2008.

"I am deeply honored to be chosen to edit the Quarterly, a journal of distinction and excellence since its founding in 1923. With the growth of medical care expenses and the ongoing challenges to the health of populations and communities, the need for thought-provoking, peer-reviewed and socially relevant interdisciplinary research and writing in the health services field will only grow in the coming years. The Quarterly will be one of the key places to find such critical information for health care policymakers and scholars as well as population health practitioners," Dr. Markel said. Noting that President Koller has also asked him to advise about other publications of the Fund, he added, "I look forward to the challenge of using electronic and print media to expand the audiences for the achievements of this great foundation and the stellar work of our colleagues and contributors."