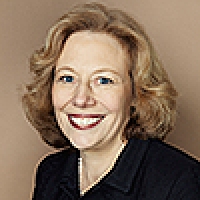 The Stella and Charles Guttman Foundation is pleased to announce that Evelyn J. Blanck has joined the Board of Directors.
Evelyn Blanck is the Associate Executive Director of the New York Center for Child Development.  She is the Co-President of the New York Zero to Three Network and has a gubernatorial appointment on the Early Childhood Advisory Council of New York State, where she serves on the Steering Committee and is the Co-Chair of the Strong Families Workgroup.
Additionally, Blanck is the Chair of the New York City Early Childhood Mental Health Strategic Work Group, an advisory committee to the New York City Department of Health and Mental Hygiene that is comprised of leading experts in the area of early childhood and was Chair of the Council on Young Child Wellness for SAMHSA Project LAUNCH.  She is a member of the New York State Medicaid Redesign Team where she is helping to shape New York State’s Medicaid Plan to address the needs of young children.
She was the Senior Leader on a Learning Collaborative to strengthen the capacity of pediatric primary care providers to serve families of young children experiencing trauma or chronic stress with John Hopkins where NYCCD partnered with Weill Cornell/New York Presbyterian Hospital. She is a founding board member of the New York Association of Infant Mental Health which will oversee the implementation of a New York State Infant Mental Health Endorsement. She is on the Professional Advisory Board of the Profectum Foundation.
A major focus of her work has been on promoting the integration of mental health in education, primary care and all child serving systems.
The Guttman Foundation directs a substantial portion of its grantmaking to early childhood programs that serve low income infants and toddlers.  The Foundation is also committed to fund place-based programs in neighborhoods with high levels of poverty and a large concentration of public housing.
Learn More @ The Guttman Foundation