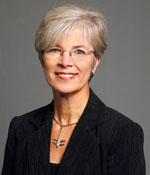 Chris Park, the Vice President of Corporate Responsibility at New York Life Insurance Company and President of the New York Life Foundation, will be retiring from her positions effective January 1, 2014. Since joining the company in 2007, Park has been responsible for managing New York Life’s philanthropic and volunteer activities. Since its founding in 1979, the New York Life Foundation has made more than $130 million in contributions to New York and U.S.-based nonprofit organizations. New York Life’s Corporate Responsibility unit includes the award-winning Volunteers for Good program, which helps employees nationwide volunteer within their communities, and the annual Month of Service, which in 2012 resulted in more than 1,700 employees and agents volunteering more than 8,000 hours of service — the equivalent of 4.6 people working full-time for an entire year.

Prior to joining New York Life, Park served as President of the Alcatel-Lucent Foundation. In addition, she served as First Vice President and Manager of Corporate Giving for Washington Mutual Bank, and for ten years held numerous philanthropic leadership positions within the Dayton Hudson Corporation (now the Target Corporation) in Minneapolis. Prior to joining Dayton Hudson, Park was an assistant to the mayor of St. Paul, Minn., and worked as a school teacher and community organizer.

Park served two terms on the Board of Directors of the national Council on Foundations as well as several years as Chair of their Corporate Advisory Committee. She also served as Board Chair of Philanthropy New York and is a past Chair of the Conference Board’s Contributions Council, on which she continues to serve. She is also a board member of The Support Center in New York City. Park earned a Bachelor of Science degree from the University of Minnesota.

"I have enjoyed my more than two decades in corporate philanthropy, having experienced multiple industries and multiple focus areas," said Park. "The work at New York Life these last years has been especially meaningful as we have built a strategic signature program focused on helping children who are grieving the death of a close loved one. I hope to continue to add value in this area after I am retired.”