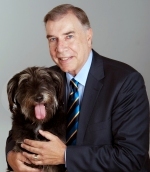 The ASPCA has also announced that President and CEO Ed Sayres has notified the Board of Directors of his intention to step down from management by year end after nearly a decade at the helm of one of the nation’s leading animal welfare organizations. A committee of the Board has been formed to oversee the process to identify the next chief executive to lead the organization. The Board committee has retained executive search firm Korn/Ferry International to manage the search process.

Chair of the Board Tim F. Wray stated, “Everyone at the ASPCA is extremely grateful to Ed for his immense contributions to the organization on behalf of our nation’s animals. During his tenure, Ed has established the ASPCA as a leader in providing sheltering expertise, enforcing animal welfare laws and rescuing and rehabilitating animal victims of cruelty. Under Ed's leadership, the organization's membership base has tripled to more than 1.2 million and our revenues have quadrupled to $148 million in 2011. The Board will engage in a process to identify a strong successor to lead the ASPCA and our executive team as we continue to enhance all of our efforts to improve the lives and welfare of animals.”

“It has been my honor and pleasure to work with the many talented people at the ASPCA and serve this vital organization,” Mr. Sayres said. “I joined the ASPCA to bring the life-saving model I championed in San Francisco to NYC and beyond. Through collaboration and very hard work, together we have achieved what we set out to do, creating some of the most innovative programs—from our anti-cruelty initiatives to our national transport efforts—that have contributed to saving many millions of animals. The ASPCA team is deep and strong, and I am confident that this great work will only continue.” He added, “I am a builder by nature and by training, and now is the perfect time to consider other opportunities in the nonprofit arena where I can make significant contributions. I look forward to working with the Board to ensure a smooth transition.”

Under Sayres’ leadership, the ASPCA has risen to new levels of national prominence in the fight to end homelessness and cruelty toward animals and has been operating and funding some of the most important animal welfare programs in the country. As a pioneer of the “no-kill” model of animal sheltering, which exhorts community groups to collaborate to stop the killing of healthy or treatable dogs and cats in animal shelters, Sayres was recruited to the ASPCA in 2003 to bring no-kill to New York City. At that point, only 33 percent of the animals in New York City’s shelters made it out alive. By the first quarter of 2012, that figure had risen to approximately 80 percent. Sayres has been the guiding force behind the ASPCA’s effort to build collaborative partnerships across the country with municipal and nonprofit animal welfare agencies so that they may end the killing of healthy and treatable dogs and cats.

During Sayres’ tenure, the ASPCA created a transport network to help transfer adoptable animals in high supply to areas of low supply and high demand and developed a robust grants program, which awarded over $15 million in funding to animal welfare organizations around the country in 2011. The organization developed a field investigation and disaster response program following its work during Hurricane Katrina, where it aided animal evacuation efforts and provided critical funding and expertise. Since then, the ASPCA has been on the ground in areas devastated by natural disasters such as Joplin, Mo., where it established an emergency shelter and provided food and supplies to help rescue pets injured and displaced by the deadly tornado.

The ASPCA also developed a program dedicated to assisting federal and local authorities' crackdown on dog fighting. In 2007, the organization worked closely with federal authorities during the Michael Vick dog fighting case, where the ASPCA's general consultation and specific role in processing the forensic evidence were key elements that resulted in Vick and the three other defendants pleading guilty to felonies. Most recently, the ASPCA played a leadership role in the removal of 50 dogs from a Bronx dog fighting ring.

Philanthropy New York is excited to welcome Amy Chen as Executive Coordinator and Secretary to the Board as of June 27th. more »
Geraldine R. Dodge Foundation Welcomes Janna Oberdorf as Director of Communications
Dodge Foundation Bolsters Strategic Communications and Engagement Efforts to Further Racial Equity Mission Read @ the Geraldine R. Dodge Foundation
Ken Shatzkes, Ph.D. Promoted to Foundation for Opioid Response Efforts Program Director
Shatzkes has over 15 years of experience performing biomedical research in academic, government, and nonprofit settings. Read @ The Foundation for Opioid Response Efforts
William Moon Joins Carnegie Corporation of New York as Vice President and Chief Financial Officer
The CFO of the Russell Sage Foundation succeeds Robert J. Seman, who retires from the Corporation after 32 years of service Read @ Carnegie Corporation of New York
Rockefeller Brothers Fund Names Joseph Pierson New Chair of the Board of Trustees
Joseph Pierson first served on the board of the RBF in 1994 and has since served four separate terms for a total of 23 years. Read @ The Rockefeller Brothers Fund
END_OF_DOCUMENT_TOKEN_TO_BE_REPLACED