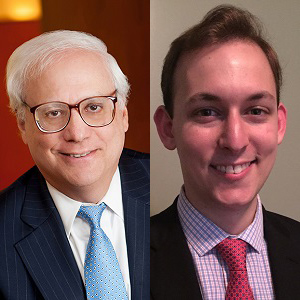 by John R. Ettinger, CEO, Leona M. and Harry B. Helmsley Charitable Trust and John T. Ettinger, Associate, Lee Equity Partners
This post originally appearted in the Stanford Social Innovation Review.
In the 2015 Masters Golf Tournament, winner Jordan Spieth, runner-up and former US Open Champion Justin Rose, and runner-up (and hero to lefty golfers like us) Phil Mickelson battled for four days. These experienced competitors knew that every stroke counted.
Or did they?
One insightful study showed that professional golfers are more accurate and strike the ball more firmly when they putt attempting to avoid bogey (a loss to par) than when they putt trying to make birdie (a gain to par), notwithstanding that the same amount (one stroke) is at stake. Given the countless hours such golfers spend seeking uniformity in their stroke, these asymmetries between situations involving loss versus gain suggest that important behavioral patterns are at work in real-world situations, which can be hard to detect and even harder to change.
Understanding decision-making patterns is the first step toward improving them. We know that despite best efforts to act rationally, human tendencies to avoid risk and loss while seeking certainty and gain can impact sensible decision-making. Research has demonstrated this phenomenon across many facets of our society—including finance, consumer products, and even golf. Given our professional and personal interest in the social impact sector, we considered whether these factors could affect the world of philanthropic foundations as well. How does risk impact—and potentially harm or benefit—our decisions when it comes to grantmaking?
To understand how risk and loss aversion, and other behavioral tendencies impact philanthropy, we developed a survey that seeks to put grant-related decision-making to the test. It looks for indications of loss aversion (disliking loss more than favoring equivalent gains), risk aversion (favoring certainty over risk even if the risky bet carries a higher expected value), and certain other typical responses to uncertainty, and considers their effect on decision-making.
We administered the survey to 70 staff members of a major US foundation, including 32 grantmaking staff. The results are generally consistent with Prospect Theory, as initially proposed by Daniel Kahneman and Amos Tversky, which underlies much of modern behavioral economics. These results suggest that:
Several manifestations of these tendencies may have important ramifications for how foundations implement their grantmaking strategies. (For a complete discussion of the survey results, view the full report here.) However, findings related to two particular points—sunk costs and regret—illustrate how behavioral tendencies can affect grant decisions.
Sunk Cost: The “sunk cost fallacy” (known colloquially as “throwing good money after bad”) refers to a tendency to allow past incurred costs to influence prospective decision-making when future costs alone (or largely alone) are relevant. There were clear, statistically significant

indicators that sunk costs were an important determinant of personal behavior for survey respondents. We tested this through hypotheticals involving situations such as securities investments or conference tickets either purchased or obtained for free. There were also indications that sunk-cost considerations affected grantmaking. One question, for example, split the group (unbeknownst to respondents) between those who already spent $1 million and those who spent $15 million on a project with identical prospects for future success. Although not at the highest levels of statistical significance, there were notable differences between the two groups in their willingness to invest future funds at the lower levels of predicted success (including the aforementioned ALAN effect at 50 percent) going forward. This directionally confirmed sunk cost fallacy in behavior.
These behavioral patterns became even clearer when we compared the results of the question above with a separate question posed to all respondents, where no previous costs were incurred. At every comparable level of predicted future success, the willingness to proceed with the grant was lower when there were no sunk costs. (For 30 percent and 50 percent future chances of success, the likelihood was greater than 95 percent that the observed differences in the willingness to proceed were not due to random variations). 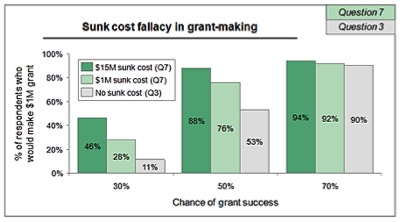 Regret: Classic economic theory generally sets aside regret, but considerable evidence suggests that it is a factor in many decisions people make. One survey question compared a program officer who switched away from a grantee that ultimately succeeded and to a grantee that failed, with another officer who stayed with a grantee that ultimately failed at the price of passing on an alternative grant that succeeded. By a great and statistically significant margin, the group believed that the officer who affirmatively acted would experience more regret. This is of course consistent with the well-documented phenomenon of people expecting to have a stronger emotional reaction (including regret) to an outcome produced by action rather than inaction (for example, in versions of the famous trolley problem, most people will not take certain direct action to save the lives of five people carelessly standing on a train track if the action would kill a single individual). The question in the philanthropic context obviously is whether this produces a bias towards inaction, detrimentally affecting a balanced analysis of alternative courses. Significantly, this could result in patterns of hard-to-detect, risk-averse behavior.
The effect of sunk costs and regret could suggest a note of caution for foundations. Left unexamined, such tendencies—combined with apparent other manifestations of loss and risk aversion—could result in situations where foundations are overly tentative at first but then over-commit to risky strategies even after progress seems unlikely. To counter these biases, grantmakers might consider taking three steps. A modest but potentially important first step would be to suggest that each grantmaker consistently use a short list of questions as a lens in his/her work. These questions might include, at minimum:
As part of introducing such questions into the DNA of an organization, a thorough discussion with staff about common biases—perhaps following the administration of a survey like the one discussed here—would be salutary. In the case of the foundation we surveyed, a presentation reviewing the results with the staff was well-received and was almost certainly more effective than a theoretical discussion of possible biases. It appears to have succeeded in interjecting some concepts (such as sunk cost issues) into the daily vocabulary of the foundation. An important part of choice architecture, the emerging study of different ways to present choices to decision makers, is to use bias as a basis for corrective change, so these positive results are not surprising.
Second, since biases displayed in personal decision-making appear in professional life as well, foundations can help staff better understand their own decision-making profiles. An increasing number of entities employ personality tests and decision-making exercises in working with employees. Some for-profit organizations use them in their hiring decisions. Even without going to these lengths, helping individual grantmakers understand their own general personality profiles with respect to risk and uncertainty may be potentially worthwhile.
Finally, foundations can open lines of communication with staff to help understand these tendencies, especially by giving staff institution-appropriate permission to fail and encouraging thoughtful questions about decisions to “double down.” Framing the issue as a “portfolio problem,” with explicit permission to take on some number of riskier projects may be a potentially useful approach.
There are grounds for debate as to whether foundations should be risk-neutral (and function principally in areas where market failures, information asymmetries, and limited target populations make action by other sectors unlikely) or risk-takers (so as to promote more uncertain and perhaps more innovative steps that business and government will not). But neither of these views would see tendencies toward loss and risk aversion as desirable, and the cultural message of a philanthropic organization should be clear on this point. In this regard, the agency effects (which occur when the decision maker makes choices on behalf of, or that affect, another party) appear to reduce tendencies toward loss and risk aversion when individuals move from personal to professional philanthropic decisions can help foundations play a socially desirable role.
Clearly the topic of the loss and risk aversion in the philanthropic sector is ripe for further study. To revisit the golf metaphor, there is a saying that “the Masters doesn’t begin until the back nine on Sunday”—demonstrably that’s when players move farthest away from loss and risk aversion. Foundations, however, should consider steps to make this true from the first swing.

New to the philanthropy field, I was encouraged to sign up for the Philanthropy New York Core: Financial Series during the winter of 2021.  more »
END_OF_DOCUMENT_TOKEN_TO_BE_REPLACED