“…Give me your tired, your poor, 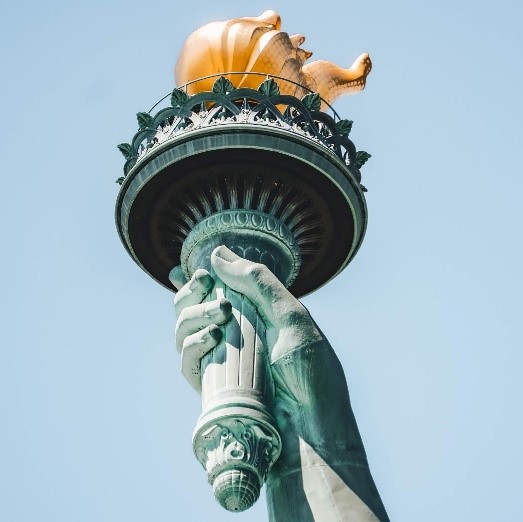 The wretched refuse of  teeming shore.

Send these, the homeless, tempest-tossed to me,

I lift my lamp beside the golden door!”

These indelible words are from the 1883 sonnet “The New Colossus” by American poet Emma Lazarus, a descendant of early Jewish immigrant settlers in America. They are inscribed on a brass plate at the base of the Statue of Liberty, perhaps the most symbolic imagery for immigrants entering the United States.

For over a hundred years, these words have offered a promise of refuge and opportunity to thousands of immigrants seeking freedom and the hope for a better life. And yet sadly today,   the meaning behind Lady Liberty’s flame has been extinguished, and the door to the American dream is being replaced with a wall.

The moral oath America made to those seeking asylum is broken. The daily onslaught of inhumane actions and policy changes targeting immigrants and refugees are not only hostile, but also physically and emotionally taxing.

Families are being torn apart, and children are being stranded, with more than 100,000 people in immigration detention centers. There are constant threats of closing off approximately $1.5 billion worth of commerce per day with Mexico, our third largest trading partner. Chants of “build the wall” at campaign rallies further polarize and entrench hate in our culture. And in the throes of a pandemic, living with an undocumented person rescinds your eligibility to an emergency stimulus for access to food and other basic needs.

The rancorous rhetoric and political stunts, whether on social media or through executive action, have replaced our promise with unequivocal dire consequences in people’s lives. It is clear that our identity as a nation is being reshaped as perceptions of our culture, security, and the economy have shifted. Technology, social norms, and conventions are frequently permeating and underscoring the way many Americans view issues such as immigration. These shifts are noisy and often disruptive.

Humanizing Immigration is a Necessity and a Moral Obligation

When it comes to humanizing immigration, we need comprehensive immigration reform, and we also need comprehensive narrative reconciliation. We often think of “narrative” as a set of broad themes, ideals, and values that help to connect us and chronicle our stories to build support for change.

Our challenge is how to articulate a clear, practical, and moral story that deeply seeds our understanding of this polarization and its underlying causes. And, more important, it must recognize immigrants not as outsiders who are only essential during a pandemic, but as immigrants who are a permanent part of us, and always have been.

Unfortunately, anti-immigrant agents have a clear narrative with two primary specious themes: Immigrants are criminals (“bad hombres”), and immigrants take over our jobs and scarce resources. And more recently, immigrants are portrayed as a disease-carrying national threat. For years we have endured this divisive and dangerous dominant narrative.

As a matter of practice, our schools, places of worship, and other community forums barely teach or are even in agreement that the consequences of wars, climate change, violence, and persecution have driven record numbers of people from their homes worldwide. The UN Refugee Agency’s annual Global Trends report found that 70.8 million children, women, and men were forcibly displaced at the close of 2018, the highest number recorded in the organization’s almost 70-year history.

Moreover, according to Define American, through television and other media platforms, we are watching and listening to more and more stories about immigrants that are based on nativism and fear. These stories have increasingly dominated mainstream news media coverage, leading to a deep misunderstanding of the value and place of immigrants in the United States. In fact, a recent study by Define American and the MIT Media Lab showed an alarming uptick in newsrooms’ use of denigrating or fear-inducing terms and tropes (e.g., “immigrant invasion“, “chain migration”), as well as an increase in the citation of known anti-immigrant hate groups, without acknowledging the radical history of these groups and their views.

We need to spend time sharing our stories, operationalizing them, and investing in leveling the field and educating ourselves as much as the public. This is not a “they” issue. This is a “we” injustice that needs all of us united to strategically reclaim our welcoming promise of refuge and solace. We need to adopt an indivisible code of arms that reminds us of our shared values of community, human rights, equality, and shared responsibility. We need to be courageous and willing to feel uncomfortable and inconvenienced. We need to talk about the intersectionality of immigration, race, and justice.

The immigration issue is not in a silo. It is a part of the global movement and national outrage that surrounds us today. Among the thousands who march each day in support of the Black Lives Matter movement are immigrants who risk being detained and sometimes deported. Immigrants and their advocates feel compelled to march in solidarity as they can relate to similar punitive and racist policies.

As Americans, we need to reclaim our moral compass and our courage. We, too, should feel compelled to protect our hope, our values, and our human rights. We should never accept that it’s okay for a child to be detained or separated from family when there’s a safer alternative; that it’s okay for only some of us to eat, feel safe, and have shelter during a pandemic; or that it’s okay even to feel entitled that we are the only ones who deserve to thrive.

Investing in Changing Minds and Hearts

Indeed, it takes a lot of courage and investment to stay hopeful and change our narrative. We need to support our community organizations to bring capacity and space to allow us to talk about the value that immigrants represent in the United States. We need to counter the misinformation and erosion told as truths with empathy, practices, and policies that truly serve our communities and promote our humanity.

Changing the public narrative on immigration, promoting tolerance, and confronting xenophobia against migrants require solidarity, courage, and robust investment. The backdrop of false narratives (more than 40 major events and policy announcements on immigration since 2017 alone), including attempts to end DACA and illegal refusals to allow asylum seekers to enter the country, is steep, confusing, and often in competition with other priorities.

Since 2012, Tides has facilitated almost $65 Million in immigration-direct services, legal support, and narrative change grant investments. Last October, Tides convened philanthropic partners at Philanthropy New York to hear from Unbound, the American Immigration Council, Opportunity Agenda, and the National Immigration Forum about the forces driving polarization. They explored successful strategies, which are dismantling the “us versus them” narratives, that could change minds and hearts about immigrants and refugees. They also shared their designed approach to create profound shifts in how people think, feel, and behave in relationship to immigrants and refugees, as well as ideas on how we can compromise with empathy in a more human context with Americans of conflicting beliefs and values. We came away with a profound understanding that there is much more to do—from championing storytelling, experimentation, and reaching across the aisle to advocacy that protects our civil liberties, human rights, and empowerment of immigrant communities.

2020 is a unique year for building community empowerment. We can’t deny the unwavering clout of new citizens and the national moment to heal our democracy. Immigrants and groups in which immigrants are a large percentage of the population, such as Latinos and Asian/Pacific Islanders (APIs), are a growing portion of the U.S. electorate. There were historic highs in 2018 voter turnout across racial and ethnic groups to build on our immigration story. In the upcoming closely-contested presidential race, the growing ranks of foreign-born individuals who’ve become naturalized U.S. citizens will increasingly exercise their civic leadership.

Still, if we are truly trying to create narrative shifts, reframe problem-solutions, and learn from cultural change strategies, we need to invest more on the frontlines. Many immigrant rights groups, like Tides grantee United We Dream, are responding to these narrative attacks by providing resources to affected communities and supporting bold advocacy campaigns, such as how to protect DACA. Tides Center social venture partner Opportunity Agenda is providing an analysis of immigration media coverage and public opinion and communications tools—such as talking points and model media materials for advocates to use in their pro-immigration media work—and in turn catalyzing a powerful group of advocates, policymakers, artists, and other social justice leaders who will tell an honest and uplifting story about the role of new Americans. Another Tides ally, the National Immigration Forum, is partnering with moderate and conservative faith, law enforcement, business, and other leaders to establish a new consensus on the value of immigrants and immigration to America.

Later this fall, Tides will launch Immigrants Belong (I-Belong)—a collective action philanthropic campaign that aims to strengthen and bring capacity to small immigrant-led nonprofits, local networks, and collaboratives through mindful communication campaigns that directly challenge pervasive misinformation and promote a more positive vision of immigrants in the US.

In the end, we want to restore the promise, ensuring an immigration story that is about humanizing all of us, welcoming and creating room for shared respect and decency. It’s important that in this next chapter our actions go beyond a hashtag and symbolism. We need to lift our voices with our vote. We need to speak up, speak out, and not be spoken for. It will take a loud, cross-sectoral, and diverse group for a new narrative to emerge. Join us!

An Opportunity for Will: Announcing PNY’s Racial Equity Working Group

What are the elements of a strong and sustainable funder-grantee relationship that drive meaningful change and impact? Read @ Philanthropy News Digest
What does it mean for the Luce Foundation to support public knowledge?
We have always believed that knowledge can make a difference in the world—and in order to do so, it must be in the world, in the hands of those who... Read @ The Henry Luce Foundation
END_OF_DOCUMENT_TOKEN_TO_BE_REPLACED