Fake News as a Real Opportunity 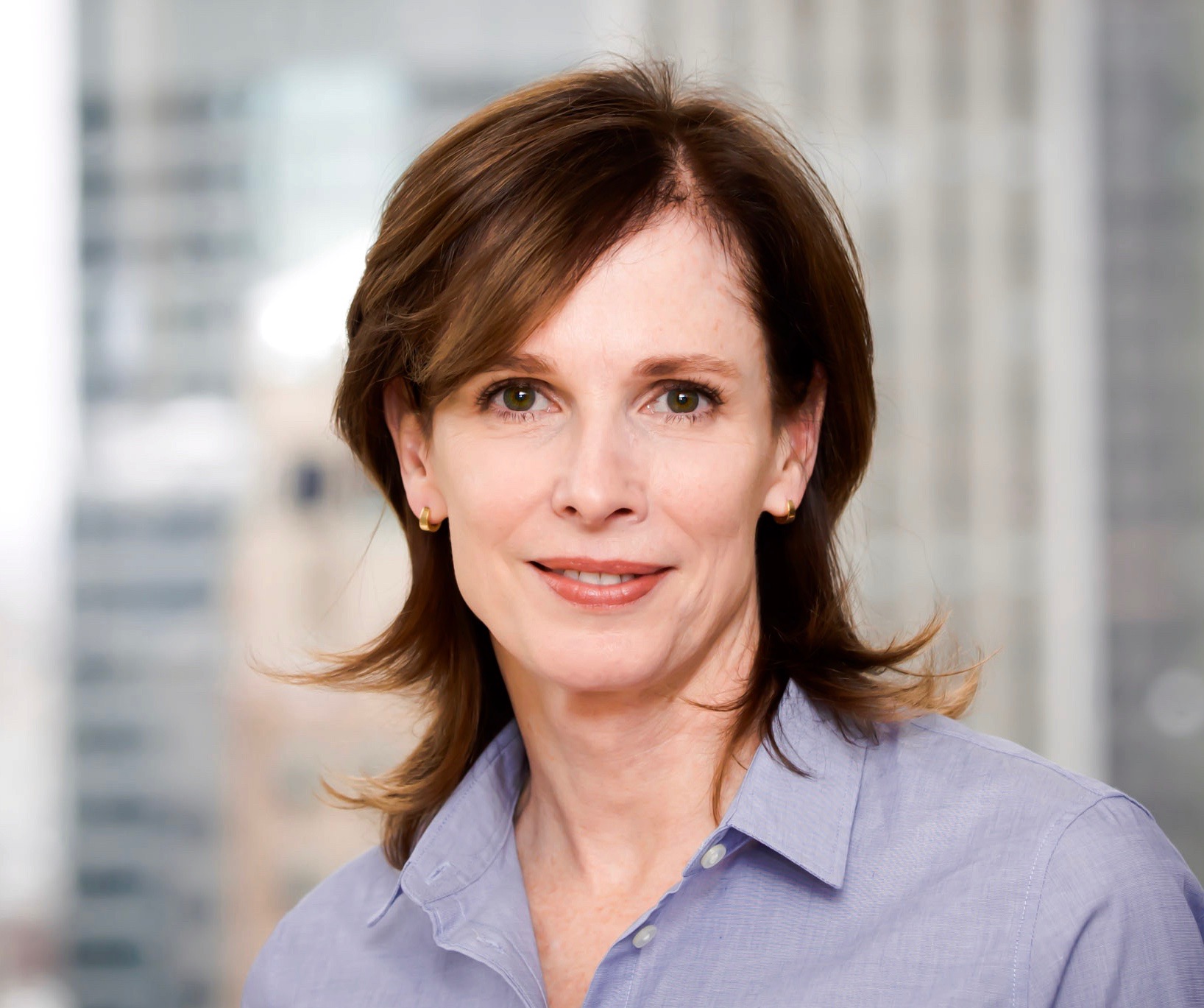 Fake News as a Real Opportunity
By Celeste Ford, manager of media relations for Carnegie Corporation of New York

According to a recent Stanford University study, most students don’t know when news is fake because they fail to consider the source and are unable “to judge the credibility of information.” While these findings are another reason to be concerned about fake news and sloppy coverage, philanthropic organizations should consider the problem to be something of an opportunity. We are in a strong position to offer a wide range of credible and newsworthy information that we can easily disseminate to audiences that are increasingly open to new sources of content.

For example, at Carnegie Corporation of New York, we have the ability to produce high-quality content by simply telling the stories of our grantees, or in other cases, helping them to do a better job at telling their own stories as practitioners and primary sources. This is not a new concept for foundations. What is new are the many options for dissemination that go beyond traditional media placements and are more affordable than sponsored or branded content.

As the manager of media relations at the Corporation, I am finding success with two options: 1) self-publishing through platforms such as Medium, and 2) developing a “win-win” partnership with a media organization whose audience is interested in our program areas. Here are two recent examples of what this looks like:

Twelve-part series of essays on nuclear nonproliferation published with The Huffington Post. As a run-up to the 2016 Nuclear Security Summit, we invited a range of high-level grantees and influencers, including a U.S. congressman, to write commentary pieces about nuclear terrorism. HuffPost wanted content for its “Nuclear Weapons” vertical, and we wanted guaranteed placement and a broader audience. The response was so strong that we were able to offer several commentary pieces to a well-established, niche publication that caters to a part of our target audience. 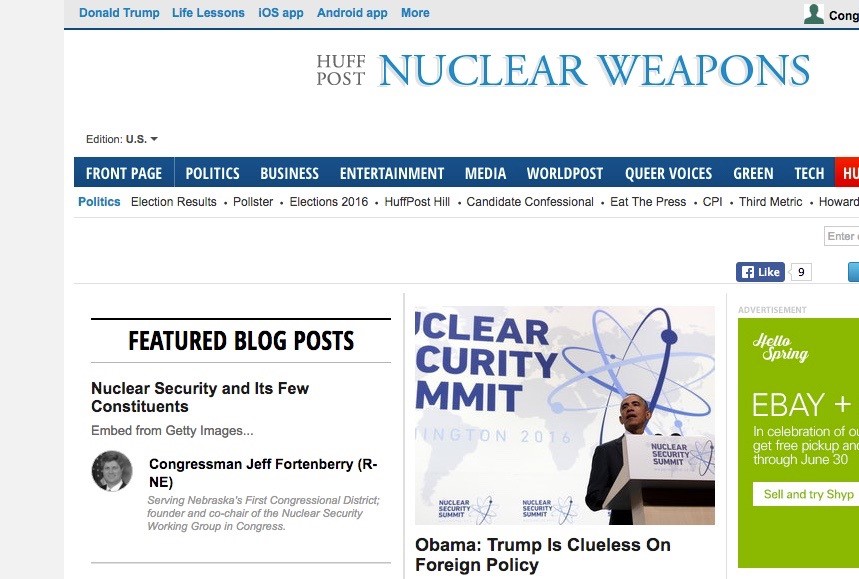 For balance and scope, we invited a range of experts—grantees, influencers, and policymakers—to write about nuclear security.

Eight-part series of essays on parent engagement published on Medium. Using a similar approach, we invited our education grantees and trusted organizations, including the National PTA and the United Negro College Fund, to write short essays about parent engagement as part of a back-to-school series. This time, we discussed a range of perspectives with each organization, set up an editorial calendar, helped each contributor self-publish on Medium, and then aggregated the essays into a featured section on the Corporation’s Medium channel. The series was titled “Parents as Partners,” and for each post, we made a modest investment in Facebook ads and we also promoted the series through our social media streams. 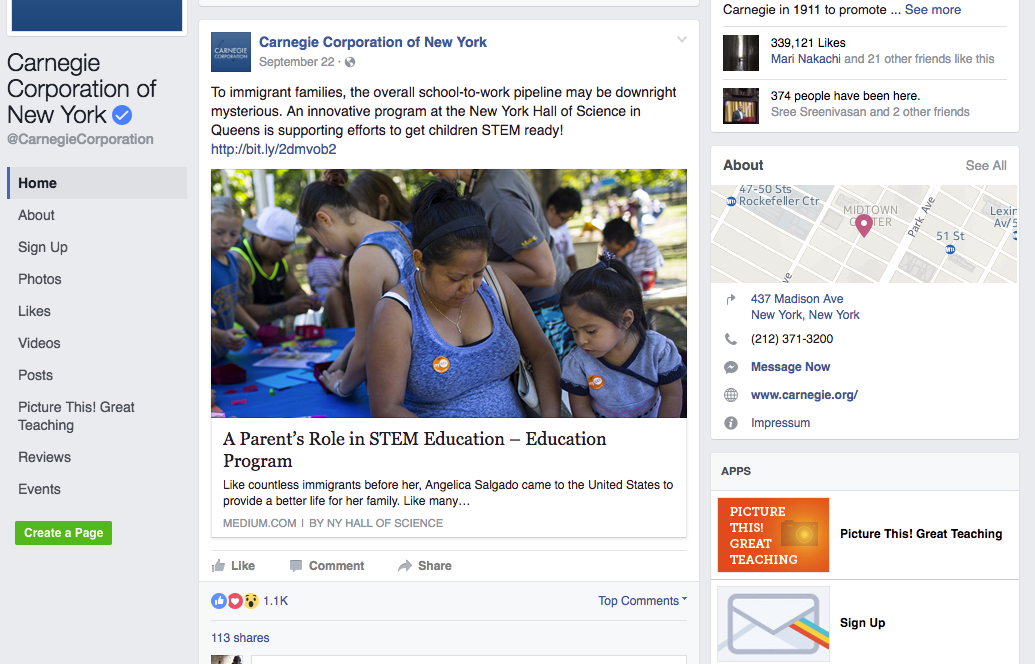 An essay from the New York Hall of Science was posted on Medium and promoted on Facebook with 113 shares from the Corporation’s feed alone.

For both scenarios we asked the communications team affiliated with each author to join us in promoting the work. We provided a piece of social media artwork, Facebook and Twitter messages, and a hashtag—basic step-savers that helped improve participation and brand consistency. Overall we found that the authors appreciated being part of a series that had the potential for greater impact due to a coordinated approach.

Initially this was a fairly labor-intensive project, but once I had sorted out an editorial system that worked for our team, things went pretty smoothly. It was also important to make sure we were not asking too much of our contributors. Going forward, I plan to have a better sense of which dissemination metrics are attainable and to then set my goals accordingly.

My strategy is to play to Carnegie Corporation of New York’s strengths as a source for smart content while providing a service both to our grantees and to the public. This is a manageable and relatively inexpensive approach that fits nicely with the Corporation’s philosophy that foundations should serve as a timely convener of credible ideas and opinions. After all, real news is always newsworthy.

Celeste Ford is member of the New York PhilanthroPost Editorial Board, the manager of media relations for Carnegie Corporation of New York, and a former news reporter covering the New York metropolitan area.

Have you heard of the “nonprofit starvation cycle"? more »
END_OF_DOCUMENT_TOKEN_TO_BE_REPLACED