Measuring the State of Disaster Philanthropy 2017: Data to Drive Decisions 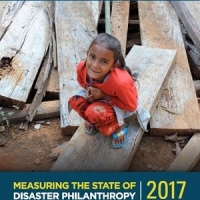 Measuring the State of Disaster Philanthropy 2017: Data to Drive Decisions

Among its findings, the report shows that large foundations slightly shifted funding to support disaster risk management—primarily around the 2014 Ebola outbreak. Funding for complex humanitarian emergencies increased dramatically in response to the refugee crisis.

Key findings for foundation funding revealed:
•    Grants awarded by 1,000 of the largest U.S. foundations totaled $158.1 million in 2015, a 30 percent decrease from the amount distributed in 2014.
•    Although overall funding dollars decreased, more grants were distributed in 2015 by more funders. In 2015, 202 funders awarded 740 grants compared to 162 funders and 525 grants in 2014.
•    The Ebola crisis attracted the highest level (20 percent) of support. In the aftermath of the 2014 outbreak, foundations made large investments in disaster risk management.
•    The 2015 Nepal earthquake received the highest number of grants.
•    Large U.S. foundations distributed $26.6 million for complex emergencies (17 percent of overall funding), compared with $7.7 million (3 percent) in 2014.

Looking at the data, CDP President and CEO Robert G. Ottenhoff said, “It is encouraging to see the shift toward more strategic disaster funding during this one-year period. We hope this represents a new giving pattern for future years.” He added, “As we continue to see the scope and intensity of disasters increase, we hope the data will motivate organizations to work together to build resilient, stronger communities. Philanthropy needs to do more to balance funding for recovery and preparation with support for immediate relief."
With data gathered from nine sources worldwide, including the Organisation for Economic Co-operation and Development and the U.S. Federal Emergency Management Agency, this new report analyzes the allocation of funds from a broad range of donors, including foundations, governments, multilateral donors, corporate giving programs, online giving platforms, donor-advised funds, and more.
“In the last few months, we've seen numerous disasters — hurricanes, heavy monsoons, wildfires, and earthquakes — cause devastation in the U.S. and across the globe. And while it's been heartening to see organizations and individuals respond enthusiastically in the immediate aftermath of these events, it's our hope that, armed with this report and the data tools, philanthropists can think more strategically about their disaster-related investments,” said Bradford K. Smith, President of Foundation Center.

Ottenhoff and Foundation Center Vice President for Knowledge Services Lawrence T. McGill will discuss key findings of the report on Wednesday, November 8, 2017 at 2:00 pm ET during a free webinar, “Measuring the State of Disaster Philanthropy 2017.” They will also demonstrate the data dashboard and mapping platform, available for free at disasterphilanthropy.foundationcenter.org. Donors, foundations, corporations, journalists, NGOs, and government agencies are encouraged to join the discussion on how to use data to drive informed, strategic disaster-related giving worldwide.
This project was made possible by a generous gift from the Irene W. and C.B. Pennington Foundation, with additional funding from the Conrad N. Hilton Foundation.