The data are part of a newly revised DATA2GO.NYC (type in “veterans” in search box, top left of landing page), an online tool available to all that now includes vital data and information on New York City’s 160,000-plus veterans in addition to more than 360 other data points on all residents of the city. Policymakers, media, the public, and veterans and their families can now easily access statistics on the well-being of veterans and of all New Yorkers at DATA2GO.NYC.

Launched to mark Veterans Day, this updated version of Data2Go.NYC provides data on vets’ income levels, poverty rates, education levels, and more. The data, from the U.S. Census Bureau, enable visitors to track veterans’ stats by borough and even by neighborhood. In addition, the revised DATA2GO.NYC includes valuable data points on all New York City residents, tracking income, education, life expectancy, high school graduation rates, housing and homelessness, 311 calls, incarceration and crime, voting, and much more. Elected officials, policymakers, nonprofit leaders, and others who need data in their work to improve the well-being of New Yorkers have utilized DATA2GO.NYC since its debut in October 2015.

Among the crucial findings of the re-launched DATA2GO.NYC are:

·      NYC’s 160,000-plus veterans fare worse than veterans nationally in terms of poverty, employment, and the proportion of adult veterans who never completed high school.

·      Staten Island’s large vet population embodies some intriguing facts. In spite of being the least likely to hold a bachelor's degree, the borough's veterans have the highest median incomes in NYC, out-earning Manhattan veterans by $2,000, as well as the lowest unemployment rate (3 percent) and the lowest poverty rate (6.7 percent).

·       Although the Bronx's veteran poverty rate overall is lower than that of Brooklyn, the borough has pockets of concentrated poverty among veterans, including the community district with the highest concentration of veteran poverty, Bronx CD 5, where the rate is close to 40 percent.

·       Half of veterans in Manhattan have at least a bachelor’s degree, while roughly a quarter in Brooklyn and Queens and only a fifth in the Bronx and Staten Island do. In half of Manhattan community districts, over six in 10 veterans hold a bachelor's degree. In Bensonhurst (Brooklyn CD 11) and Mott Haven and Melrose (Bronx CD 1), only one in 10 veterans do.

Vets’ poverty rate is highest in Brooklyn and lowest in Staten Island.

DATA2GO.NYC now has the most recent available data for the great majority of the tool’s 360 data points. The tool has 22 institutions visitors can map, including locations of every school, hospital, NYCHA development, toxic dump site, library, food pantry, even liquor store. In addition to the veterans data, the site has added data on reported rapes, geocoded using NYPD data.

Funding for DATA2GO.NYC is provided by The Leona M. and Harry B. Helmsley Charitable Trust. 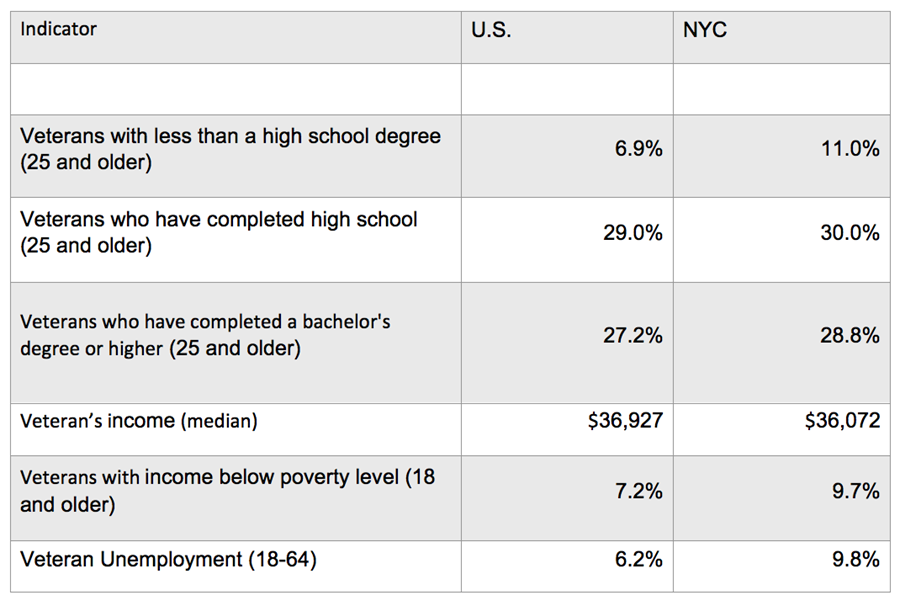