At PNY Annual Meeting, Kristof Asks Gbowee and Eliasson “What Would You Do with $1B in Philanthropic Funds?” 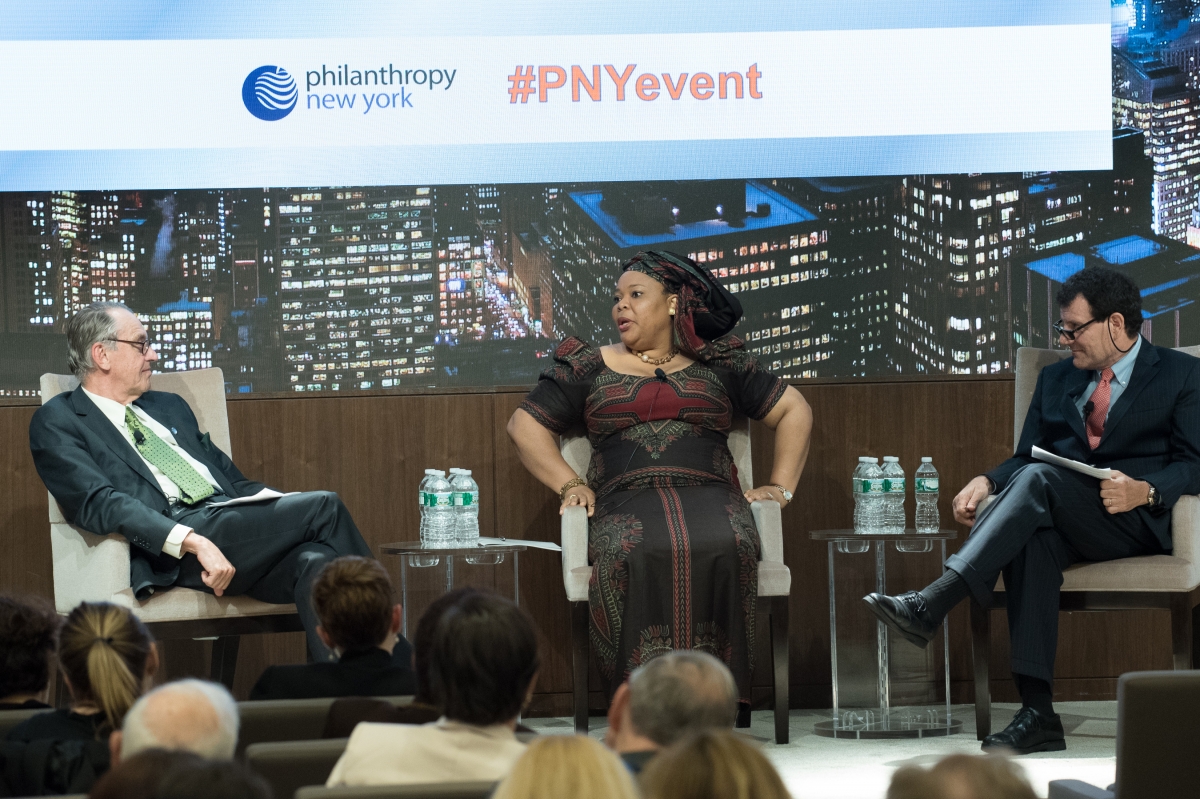 In his opening comments to Philanthropy New York members, Eliasson talked about a range of issues that are priorities for international institutions like the United Nations, but emphasized, “We can’t do it alone. Nobody can do it alone. Nobody can do everything but everyone can do something… The new sustainable development goals that we negotiate can never be done if we don’t have the corporate sector, the philanthropic sector, the scientific community. Then we can get things done.” Throughout his remarks and in conversation with Kristof and Gbowee, he repeatedly emphasized the need to focus on providing developing nations with clean, safe potable water.

By contrast, Gbowee said that large institutions, including philanthropy, too often operate with a hand covering one eye – only seeing part of the picture. Over the course of the conversation, Gbowee pointed to the frequency with which funders change direction and respond to the crisis of the moment rather than dedicating themselves to long-term solutions and taking the time to deeply understand the desires of the communities that are the best partners in charting a path to progress. When asked by Kristof how she would use $1 billion in philanthropic funds, she said, “I would dance for a week, because I could just imaging all of the tiny, but really substantial projects I could put it into. I would focus on girls’ education, maternal health, youth empowerment and employment… I could do a lot, and can go on saying, but then the temptation is I would end up being like a lot of those I just talked about, too little focus and not [accomplishing] any specific thing.” Gbowee consistently criticized philanthropy’s over-emphasis on measurable outcomes at the expense of learning the intricacies of complex relationships within communities to avoid unintended consequences. In Kristof’s probing conversation, Eliasson and Gbowee talked about the role of philanthropy in addressing armed conflicts in places like Syria and South Sudan, taking projects to scale when they seem to be working, avoiding “feel-good philanthropy,” and not letting philanthropic investments give governments an excuse to let up from their own obligations domestically and internationally.

The provocative conversation among Kristof, Eliasson and Gbowee was preceded by “PHIL Talks” – a set of rapid-fire presentations by three fascinating leaders. After PHIL Talks presenters Kilmurray, Satekge and Sabbagh gave their talks, they sat down with Ford Foundation President Darren Walker, who found common themes and contrasting ideas among the three women who had vastly different life experiences.

Advance through the video for key moments:

The Annual Meeting concluded with the keynote panel. This discussion included an examination of the sector's role in other countries, creating coalitions to spur change and the importance of focusing on action and not just relying on numbers and metrics.

Advance through the video for key moments:

- 00:01 Ronna Brown introduces Monica Issar, Global Head of Endowments & Foundations, JPMorgan Global Wealth Management
- 02:38 Ronna Brown introduces Jan Eliasson, Leymah Gbowee and Nicholas Kristof 07:18 Jan Eliasson, Deputy Secretary-General, United Nations
- 15:10 Leymah Gbowee, 2011 Nobel Peace Laureate and President, Gbowee Peace Foundation Africa 22:25 Conversation with Eliasson, Gbowee and Kristof
- 23:30 “What is philanthropy’s Role in Syria/South Sudan?”
- 27:17 “Is philanthropy’s emphasis on metrics and scalability misplaced?”
- 38:38 “There’s a lot of feel-good in philanthropy nowadays…A lot of people feel bad about something, so then they just go and give something to somebody.”
- 58:23 “What would you do with a billion dollars?” (Gbowee)
- 100:00 “What would you do with a billion dollars?” (Eliasson)
- 103:14 “Is there a risk that we’re letting governments off the hook if private philanthropy is funding things that governments should be funding?

See who was there and how your colleagues interacted with these leaders!

We invite you to experience (or re-experience) the Philanthropy New York 36th Annual Meeting with our Storify collection of Tweets.